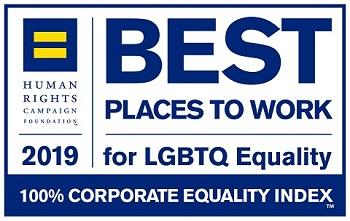 CHICAGO (March 28, 2019) – MillerCoors proudly announced that it received a perfect score of 100 on the 2019 Corporate Equality Index (CEI), the nation’s premier benchmarking survey and report on corporate policies and practices related to LGBTQ workplace equality, administered by the Human Rights Campaign (HRC) Foundation.

The 2019 CEI evaluates LGBTQ-related policies and practices including non-discrimination workplace protections, domestic partner benefits, transgender-inclusive health care benefits, competency programs, and public engagement with the LGBTQ community. MillerCoors efforts in satisfying all of the CEI’s criteria results in a 100 percent ranking and the designation as a Best Place to Work for LGBTQ Equality.

“We’re extremely proud to again be recognized by the HRC with a 100 percent ranking for our LGBTQ workplace equality practices and policies,” said Dave Osswald, chief people and diversity officer for MillerCoors. “While this serves as validation we’re on the right path, we’ll never stop working to build an inclusive culture that values the different backgrounds, experiences and perspectives of all our employees.”

MillerCoors has received this honor for sixteen consecutive years. The company has also been recognized in the past for its LGBTQ efforts, including being awarded the 2016 Corporate Equality Award from Human Rights Campaign and named Corporation of the Year in 2015 by the National Gay & Lesbian Chamber of Commerce.

“The top-scoring companies on this year’s CEI are not only establishing policies that affirm and include employees here in the United States, they are applying these policies to their global operations and impacting millions of people beyond our shores,” said HRC President Chad Griffin. “Many of these companies have also become vocal advocates for equality in the public square, including the dozens that have signed on to amicus briefs in vital Supreme Court cases and the more than 170 that have joined HRC’s Business Coalition for the Equality Act. Time and again, leading American businesses have shown that protecting their employees and customers from discrimination isn’t just the right thing to do -- it’s also good for business.

For more information on the 2019 Corporate Equality Index, or to download a free copy of the report, visit www.hrc.org.

The Human Rights Campaign Foundation is the educational arm of America's largest civil rights organization working to achieve equality for lesbian, gay, bisexual transgender and queer people. HRC envisions a world where LGBTQ people are embraced as full members of society at home, at work and in every community.